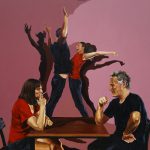 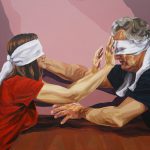 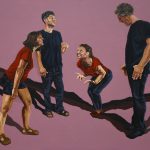 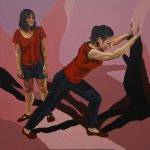 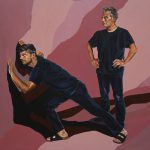 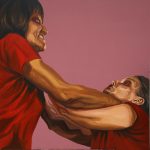 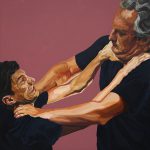 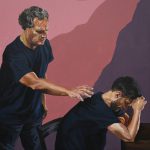 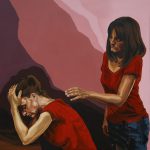 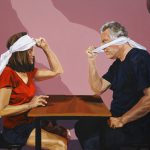 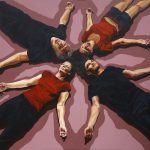 Everybody has illusions of their own, the question is: are we aware of them, and do we want to change them?

Strong contrasts interest me in all possible forms, physical and spiritual, as does perception. The existence of the opposites contemporarily, in the human mind as in the universe intrigues me.
I’m thinking about human perception as of something defined by our previous experiences. This is the perception story.
Illusions paintings show four characters and my vision of their self-understanding after two decades; They talk about exploring of the self, inner struggles, love, psychological states and growing up. I imagined the two men as the same one as young and as older, and the same for the two women. They are practically observing (thinking about) themselves when they were young.
In the given order you can see the story, but every painting separately is a psychological study open for different interpretations.
For this series, I first developed the scenario, hired the theatric actors which acted under my direction, took the photographs and then painted. This whole cycle is born after my work on hand painted film “Loving Vincent”, which moved me towards expressing my ideas of perception change in a form of paintings connected in a story.
Biserka Petrovic